The trial period has expired please purchase if you like to continue using the theme.
Getting Investors And Building Momentum with Nathan Beckord 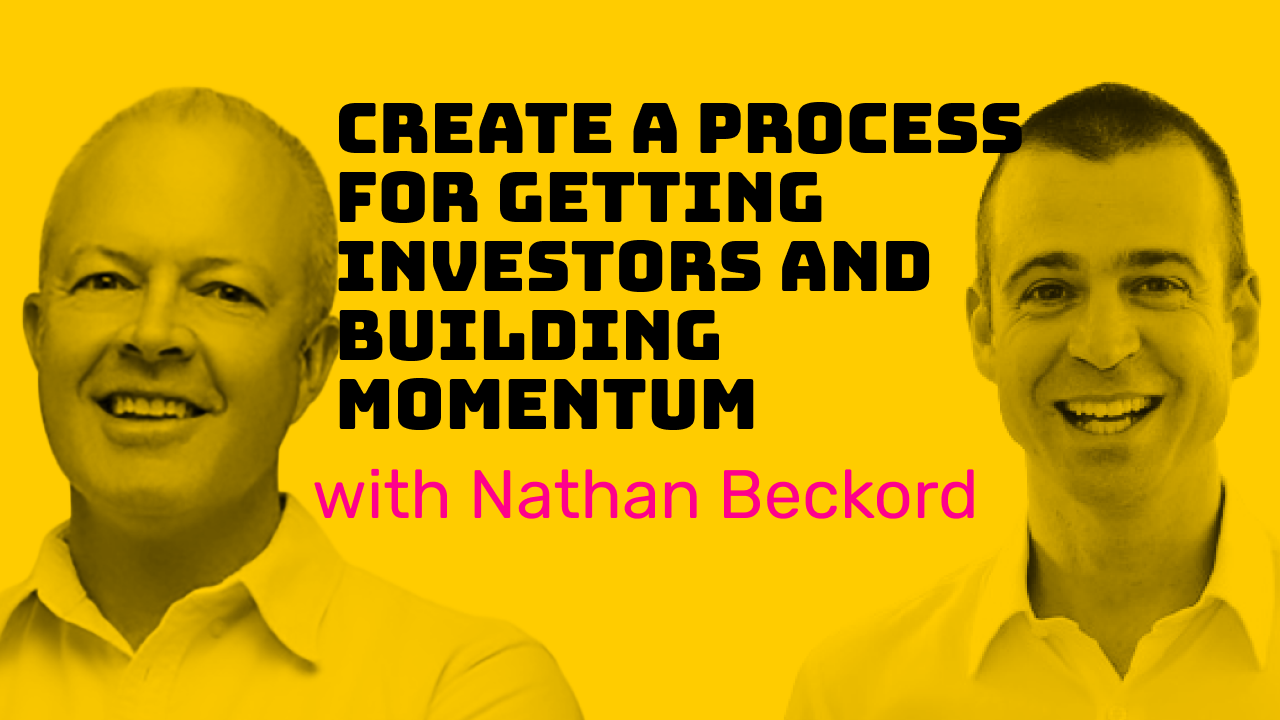 Nathan Beckord helps startups get the two things they need most; time and money. He is the CEO of Foundersuite.com and VentureArchetypes.com. On the consulting and advisory side, he mainly works with early-stage internet, B2B software, mobile, and consumer product startups. He is also interested in platforms, markets, and networks. He is fanatical about helping startups raise capital and loves sailing and is a motorcycle junkie.

(01:10) -Nathan Beckord:  So currently creating a couple of interesting things. So I run founder suite, as you mentioned, we make a software platform that helps startup founders raise capital. It includes a database of investors, a CRM to manage your pipeline of investors, pitch, deck, hosting tools, investor, update tools, startup docs, with the whole end-to-end suite of tools for raising capital. The thing we're creating right now that I'm super excited about is we're creating user-generated data about investors. And so that if you're a founder out there, um, approaching and pitching, uh, Tom Perkins or, you know, benchmark capital, this will provide some real insights as to what they look for. Are they actively doing deals, um, you know, any tips for pitching them for navigating through the deal process with them. So real insightful stuff about each investor, which is kind of game-changing, cause that's not really out there, but founders really, really need it. So that's what I'm excited about making right now.

(03:06) - Nathan Beckord: The first thing I would counsel startups is to be mentally prepared for that. If you want to raise money, you've got to treat it like a full-time job for, for a couple months. And you know, that's really hard to do because you've got other people to make your customers happy.

(04:01) - Nathan Beckord: So much of fundraising is driven by momentum for your deal. And it's very hard to get momentum going. If you're only putting in four hours a week on something, right, it just doesn't happen. Your deal never gets hot. It never catches any heat and it gets stale after a while. So anyway, I guess that's tip number one is try and clear your plate for a few months. So you can just go all in on fundraising.

(06:28) - Nathan Beckord: Tip number one, we've cleared your plate. Now you can go in and focus on fundraising for a number of months. Now we want to put on our sales person hat, if you've ever worked in sales, you know, your job is to build a list of prospects to qualify that list and to really be pursuing each prospect towards a close towards a yes or no. And that same thing applies to fundraising. So building the pipeline, you know, I just to throw some numbers out there, if you're raising a seed round, I usually say you should have a hundred to 200, even 300 investor names at the top of your funnel. If you're raising a series, any of those numbers go down a little bit to maybe 50 names, series B, maybe 30 names, but you know, early stages, you should be aiming for say 200 names.

Um, and really again, if you think of it like a pipeline, like a funnel, your, your job is to be moving all 200 of those investor prospects from research to contacted or introduced into a pitch, meeting into diligence and negotiations and into either a yes or no type of decision. Right? So that's why we kind of describe it as a pipeline or horizontal funnel. You've got your steps each step of the journey along the way from researching and qualifying that list all the way to yes or no. And the steps in between. And if you think about that, you know, your job becomes much more clear, transparent, you know, what you need to be doing every step of the way with each investor along the way. So that's what we really think about building and running a pipeline.

(08:08) - Simon: In your experience, what's different right now in this global state of pandemic are all the stages like they were always, or are some stages right now, easier or harder.

(08:21) - Nathan Beckord: There's good and bad about being an independent raising money

(10:17) - Simon: What about the investors? Are there more or less interested?

(11:15) - Nathan Beckord:  A classic investment banking quote is you should be buying when there's blood in the streets.

(13:24) - Nathan Beckord:  Yeah. Yes, absolutely. One thing that does go back to tip, number one is clearing your plate, make sure you have the bandwidth to dedicate to this because I do see a collar mistake where founders get into fundraising, they get into it for a couple months and then they start to get pulled back into their business and they kind of take their foot off the gas pedal and then things slow down. An investor can sense that they pull out other investors hear about that. And the whole thing falls apart. So one, I guess kind of key tip is keep your foot all the way on the gas pedal, but you know, more practically speaking, as I said, you know, fundraising is driven by momentum. It's driven by tempo and speed.

(15:12) - Nathan Beckord: So when you're meeting with an investor, most of the time they'll ask you, how's the round coming together. You know, that's their way of probing helicopters. That's their way of probing. Does this deal have momentum or can I just watch and wait? And you know, whenever you can answer that with we're running a pretty efficient process right now, I'm, I've got 15 meetings set up this week, I've got 20 meetings set up next week. Um, you know, I'm hoping to close this out by, by Christmas time. Um, and, and signaling that you've got other investors interested, right? So in the early stages, it might just be how many meetings you're having later on. If you can say, well, we're in diligence with seven firms, I'm expecting to get a term sheet from three of them. By next Friday, you're always signaling that there's momentum going, that others are interested in the deal.

(18:29) - Simon: What are some books or audio books that inspired you recently?