The trial period has expired please purchase if you like to continue using the theme.
The future of seeing around corners is now with Rita McGrath 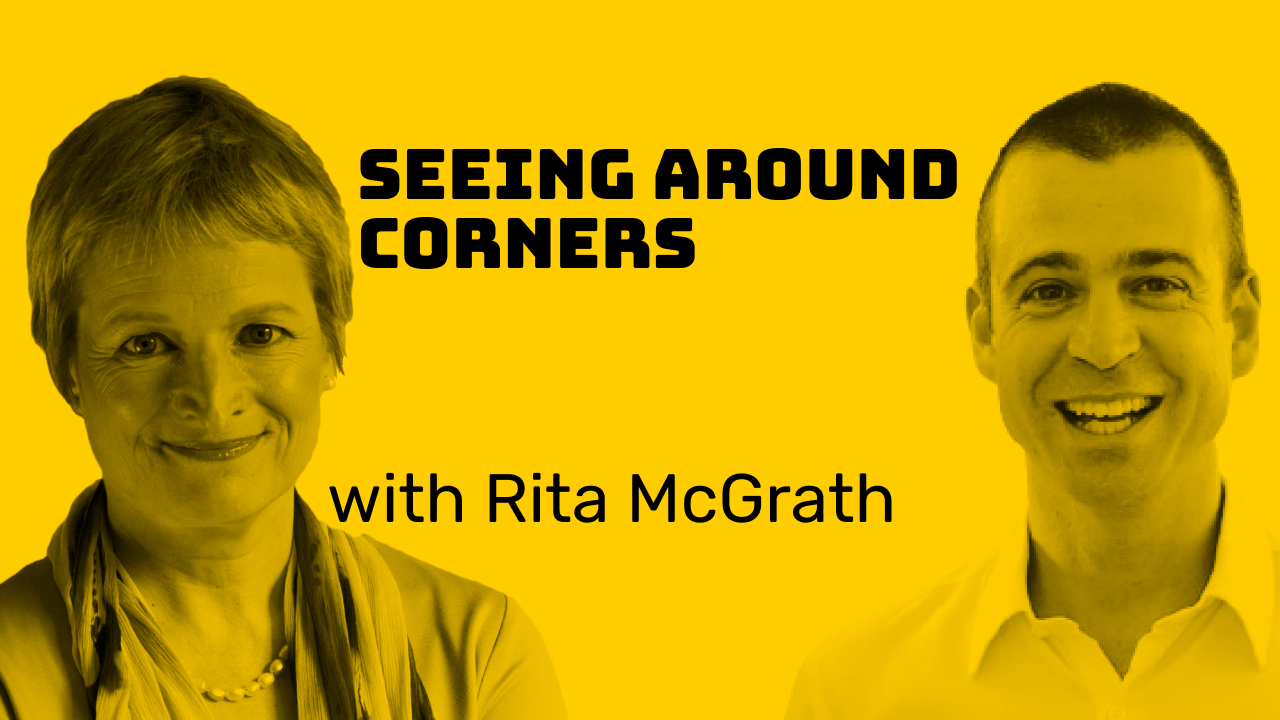 Our guest today is Rita Gunther McGrath, a Professor at Columbia Business School, who is regarded as one of the world’s top experts on strategy and innovation with particular emphasis on developing sound strategy in uncertain and volatile environments.  She developed the discovery-driven planning method, which became part of the foundations of the lean startup movement that became a worldwide movement. Now she's enjoying the one year anniversary of seeing around corners and taking her Columbia executive education classes.

See the transcript below:

(02:39) - Eight specific practices so that we can see something happening before it happens

Rita McGrath: Well, so here's the interesting thing about strategic inflection points and I should probably define those first. Um, so a strategic inflection point is some outside pressure that exerts a 10 X force on your business. So that could be technology. It could be regulation, it could be social change, but it changes something fundamental about your business. And one of the things that inspired me to write the book, seeing around corners is this notion that inflection points feel as though they happened immediately. You know, at the point of impact you feel, Oh my God, this is just crazy.

(09:00) - What are some of some books that touched you recently professionally?

(10:14) - Stop thinking in industries and instead think of arenas

Rita McGrath: So the concept of industry is a really interesting one because so many people let it frame the way that they look at the world. And we forget we made this up, right? We make up the fact that there's a journalism industry or an academic industry or an aerospace industry. Um, and what we see now is that industry boundaries are getting very blurry. Um, Oh, the other thing about industries is thinking about strategy analysis in terms of industries means by definition, the firms exist, the transactions exist. The people doing the transacting exists, the business models exist. In other words, you're leaving out that whole period before an industry that we could call an industry comes into being. And so you're leaving out an enormously important part of the whole process. So that's the first challenge. The second challenge is any business, any industry, uh, forms at a particular point in history and certain things are possible and certain things are not.

(20:18) Speaking of meetings, what have you find out recently to make meetings more fun, crisper in your, in your context?

Rita McGrath: Oh, I think, I think having some fun with it is really important. So a great book I can recommend as well around books is a book that's coming out in the US it's out in Europe, it's called humor, comma, seriously, it's by Jennifer acre and Naomi bag donuts. And they talk about using humor as a way of people getting people to relax. It releases kinds of great hormones. It produces trust. And in the book, they go through a whole litany of, ways that you can bring humor and bring levity and bring humanity into your life, which is really, really wonderful. I can't recommend that book enough. It's great.

Rita McGrath: I do think one of the more interesting aspects of strategy right now is really brought about by digital and how the fact that we can now connect, you know, if you think about digital, right, it's sort of started in marketing. Like everybody had to have a webpage, and that was as far as it got, and then, then it got into products. You know, you can't buy a hammer net without looking at the Amazon review that said, Oh, you know, I left it out in the sun and the plastic handle melted, don't buy this hammer, you know, who knew? And now we're seeing digital and business models and that's where it starts to have a really big strategic impact because things are possible that were never possible before. You know, if you think of something like dollar shave club in shaving, right? I mean, if you wanted to get a video message to hundreds of millions of people, even 30 years ago, you didn't have to own a production company. You'd have to own a film studio today, two guys in a garage with a medium price. A smartphone can do that. And that is just a dramatic sea change in what's possible. And what's not.

Rita McGrath: So if you're, if you're in a new business, let's say, I mean, I've said this for a long time. What you want to do is document your assumptions because they turn into facts in our heads very quickly, if we don't acknowledge and write down their assumptions. Um, so as an example, you know, you asked about small businesses, any small business that has the assumption that people are going to feel comfortable in the company of strangers. That's a huge presumption that, that no longer holds. And so if that isn't true, what would you do with your business? Right. And so I think starting from what are these foundational assumptions that we're making is a really good place to begin.

Rita McGrath: There's a guy named, uh, Albert Albertos Boyer who might be another good guest for you. He's, he's great. But he has a, in his book, he's got a tool that I just love. He calls it the skin in the game of calibre. And he uses this to judge whether an idea is worth pursuing or not. And he says, you know, somebody says, they like your product. Zero points. People will tell you anything, right? Somebody gives you a real email address and says yet they would like to hear more 10 points. Maybe, you know, somebody, you know, grabs you by the throat, says your $5,000. How quickly can I get this? Yes, that's, that's your Underwood's.

Get a free report on your current sales processes with our 15 minute Sales Audit and consultation with a Sprint coach!