The trial period has expired please purchase if you like to continue using the theme.
The safe NFT project that I bought with the possibility to 10x The Best Biz Coach I Simon Severino 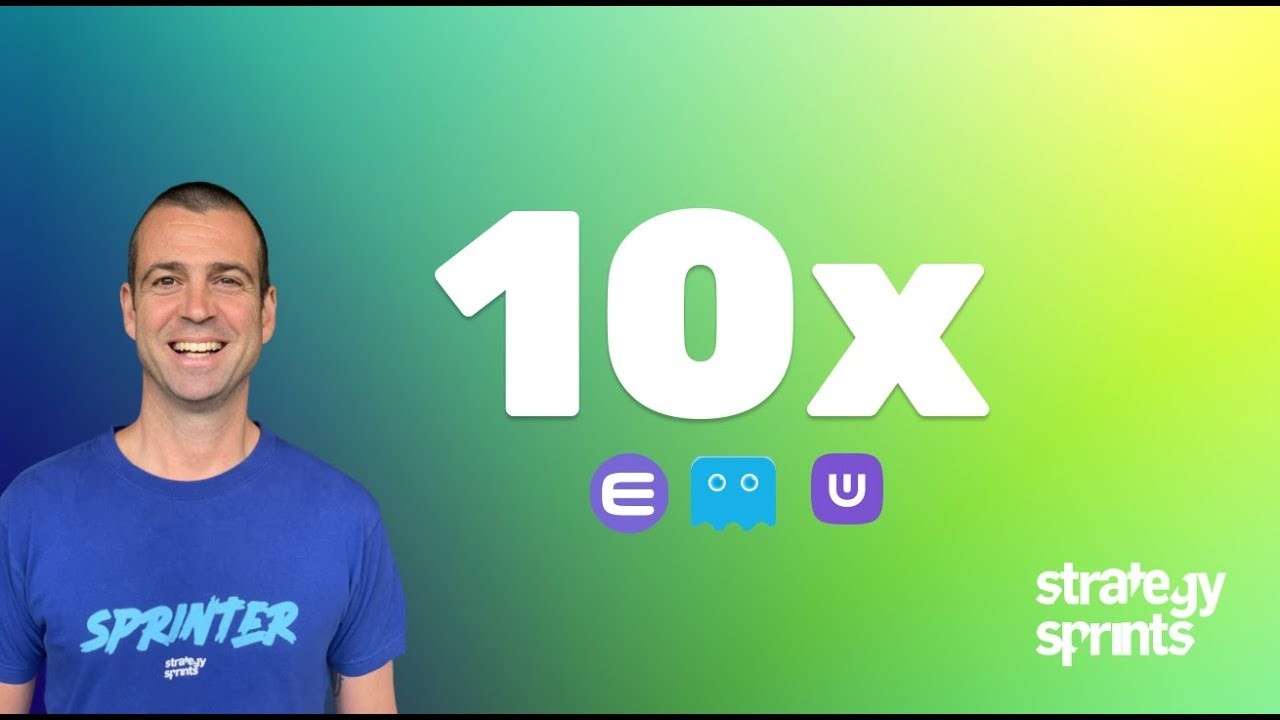 Preparing for an inflation

Super excited. This week was the hell of a ride. We had Bitcoin down markets week, everything in the stock market down and only, um, a couple of our friends up. Let's learn from this and see where this moves from here. Engine up 18% affinity up 29, send FTA up 24% and ultra up 24% while Bitcoin goes down an interesting, um, pattern that we wanna understand origin also up, but that's a different game. So what have engine affinity, FTAs, ultra, and common. They are crypto gaming assets. What does the market think right now about crypto? Well, different things. Um, it's, it's not completely believing about Bitcoin yet. There are many long term holders, but we are still talking about now 1.8% of the world. So the rest is not a in idiot. Still people are in lockdown, people are playing and when they play, they have basically two options.


You can play and put a lot of time in there, but then somebody else owns the creation of your work. And the other option, which is right now, right here, Hey, I can play a game and whatever I create is mine. I can take it with me. It's in my wallet. When I move to another game, I can send it, lend it, borrow it. I can take it with me and use it in the next game, in the next city that I wanna visit. So there is freedom coming up and people want the freedom to move around and they, and also ownership about what they create. And they're not okay anymore with the old corporate model, when you create something and somebody else owns it, uh, they also want to have their own data. So this is the trend and it might be something that is a hedge against inflation when the bear markets come and they will come at some point because after every pool market comes a bear market.


So can these guys prepare us for an inflation? Let's see, you know, we are picking the top 10 for the next cycle right now. The old cycle went really well. We nailed three, 10 X assets. And so with 10 X debt portfolio, but now we are creating the next portfolio and I will create this next portfolio life with you over the next weeks. I'm even thinking of investing life in front of you, where you tell me how much to put in. And I go through the top 10 and show you which one is a buy right now and which not. I'm thinking about, um, that format. Let me know, uh, if you would like that. And, um, let's dive a little bit deeper into engine affinity, asthma ultra. How are they doing right now in the last four hours? Let's look at ultra ultra is right now NBI because as you can see it just pumped, it's at the upper Bollinger bend.


It's above fair value line. So it will cool down. But if we look at how it did over the last period, it has been doing really, really well. And the strongest part was funny enough, the part where Bitcoin was down the last 14 days of the Bitcoin stagnation. Now we are at 2.3 today. So it's not the perfect moment to get in. This is something to watch. And if it goes down to its lower, the best entry point would be here at 1.3, the second best. Now, if we do fiche retracement, we will know exactly which one to go in here, but we are no day traders here. So we don't have to nail exactly the thing. So this whole zone you can watch from 1.3 to 1.6, I would watch this zone and even put limit orders in there because as soon as we reach this zone here, that is a very nice point.


But we also look at two other things. When three things converge, this is when you want to buy first, the price is in the lower part of the Boger band. Ideally it touches the lower B band here. The second thing is the RSI is below 30 current RSI, 71. Don't touch it. Uh, above of 70 is a cell signal. And below 30 is a BI signal. So lower balling bend plus ACI 30. Plus the Mac D turning green, all three comes together. This is a fire, uh, sign. This is a moment to by, and that has been ultra. Now let's look at our other friends. Um, let's look at the engine token engine, same thing here, airs. I super high, 74. Don't touch it, but look, what's going on here. This is definitely definitely a candidate for our 10 X 10 picks for the next portfolio.


Look at this. I can really think that engine is one of the top 10 for the coming cycle. And the coming cycle has not even started when I say coming cycle. I think about the crypto gaming cycle, right? We are just at the beginning of it, there was this announcement by Facebook that they are calling themselves meta, and this has brought some attention. And, um, since then people are looking at play to earth at crypto gaming. And since then, the re is an attention that has brought some hypes, but there are also two sided marketplaces. When I say hypes to me, sandbox is something that will do really, really well, but it's just one game. And one game is high risk. And as you know, we don't go to high risk, uh, assets because one game is one sided marketplace and one-sided marketplace can be replaced anytime by a two-sided marketplace.

Potential of being in the top 10

Why is Facebook around? But MySpace is not around anymore. One-sided to two-sided marketplaces. Why is Yahoo not around, but Google is around two-sided marketplace network effects. When you have network effects, it's really hard to stop you. The mode is higher. The dependability is higher. We are strategy advisors here since 18 years, we are advising teams on strategy. And so in strategy, you always want to go for network effects because you have multiple magnets, you have higher dependability and you are unstoppable because of the two magnets. So this project here engine has the potential to be one of the top 10 picks for the next cycles that we will put into our portfolio of. And I even plan to do live investing with you here. When you tell me, uh, how much I should invest, and I go through all 10 and show you exactly the right, uh, one to pick for that week.


According to, to this three things, the Bollinger bands, the Mac D turning green, Andi below 30 or around 30, when we find these three things and we can analyze them live together. If you want day by day, finding the right spot and then sniping together so that you learn how to do this and get emotions out and have a system on how to do this. So I use trading view. This is trading view, and it's the free plan. So you don't have to spend anything to create your investment, um, system. Really. I use just spreadsheets and trading view, that's it. And, um, you don't need more than that. Now you will need, uh, a ton of wallet, uh, wallets, the, the more, the better cause the highest risk in owning crypto is that one of your wallets gets robbed, gets hacked. So the more wallets you have, the better it is because if one gets hacked, you still have eight or nine others.


So spread your risk. And I have done a full video on security. I think it's 22 things that you can do to secure your crypto assets. And please do at least 15 of them, uh, all of them and your ARA safe, but 15 of them, you are quite UN hackable. So please do it because, uh, this is the age of autonomy. So you are now your own custodial, and that means you have also to take care of your own security now, super exciting times, uh, engine ultra. And, um, what else do we want to have a look at? Let's look at F F ticker symbol, soul F ticker symbol, soul bit confusing, but that's, that's the case. I over boat 71, don't touch it right now. And, um, price at the upper Bollinger bend again, where you don't wanna buy a fair price would be 2.4. A much better entry will be around


1.6 and everything actually be between 1.6 and 2.3 would be a much better entry. This is fantastic in the last four hour, absolutely strong. Now, usually when something pumps like this, it's over, it's too late. Now you are chasing and we don't chase, but it was pumping in a weak market. That means there is a reason. It solves a problem. There is something that the market see in it. And so we will di dive deep into what is it I will UN lives over the next days. Exactly. If this crypto gaming attention is something that shows long term viability, some of them do engine has shown to be one of the top 10 for the next cycle, but can FSMA be, can ultra be one of the top 10? We will see, I will dive deeper, do the due diligence on their teams, on their investors.


Are they able to execute the product really able, are they able to execute the marketing insights really able, because you have, you can have a great product, but you will not sell it. If you are not able to, to go to do, go to market for, at the gene, go to market execution. And so 90% of the crypto projects are not able to deliver on that side. And then many are not able to deliver the product itself. So I will do my due diligence, go through all team members of that project and see if they have shown that they can deliver. Um, I will not say that they have to have been successful in delivering one, but they have to, because success is not in their control. Success is not in the control of the team, but the lead is in their control. Maybe they have been in an industry which overall has been tanking, but they have delivered at the best of what can be delivered there. Then they will get a green. Otherwise they will get a yellow or red in our due diligence score card. And you know that we check for 10 things and I will do this live with you. Let me know what to analyze next. And, um, let's pick together the 10, 10 X projects over the next weeks for the next cycle. So you are prepared when inflation comes. You have something that pumps, all right, keep rolling sprints.