The trial period has expired please purchase if you like to continue using the theme.
Narrative driven innovation. Stories on preparation, aligning, allies 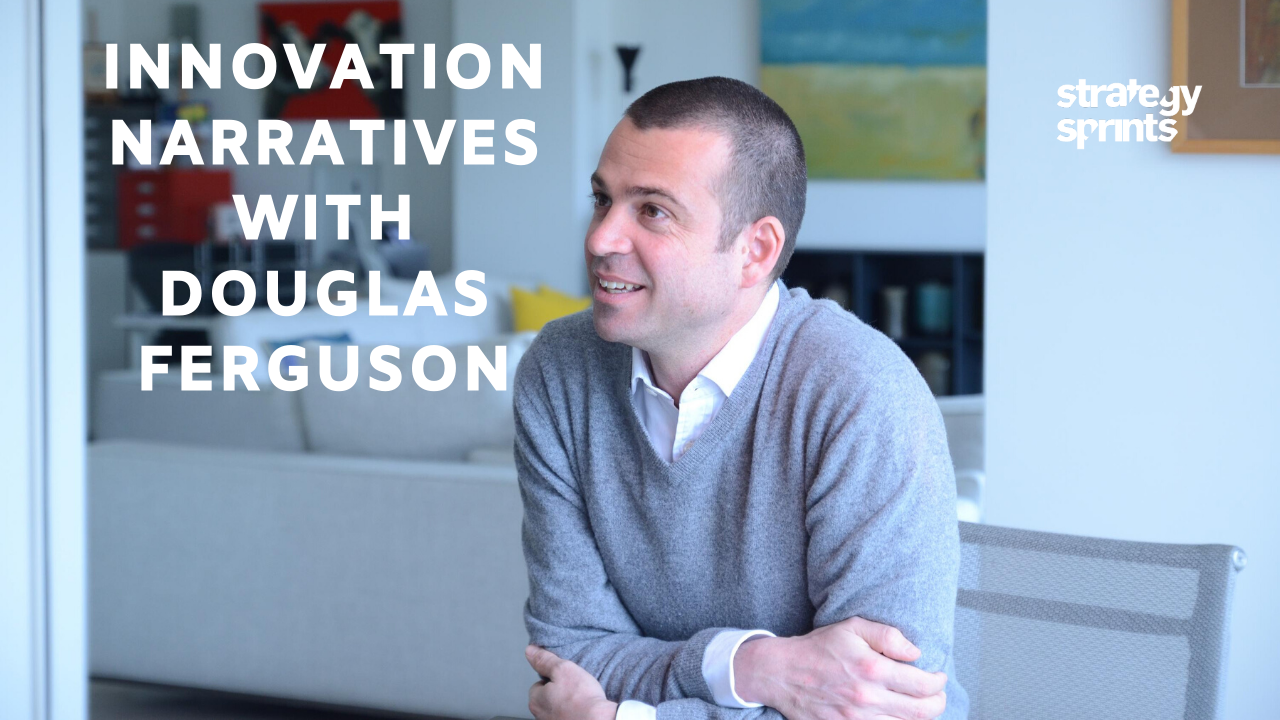 Simon: Welcome everybody to the Strategy Show! This is part three of our interview with Douglas Ferguson from Voltage Control. This time we are going to deep dive into how storytelling can enhance innovation. Hi Douglas, how are you?

Douglas: I'm doing well. How are you?

Simon: Fine thanks! What can we learn from narratives and innovation?

Douglas: Story: Early on in Voltage Control as we were starting to bring workshops and Design Sprints and other innovation workshops into corporates, I had a CEO purchase a Design Sprint. He wasn't able to attend the Design Sprint so he had another decider, his product manager, and the Sprint went well. They gained a lot of insights and were looking at how they would apply those insights and iterate on the prototype. I was pleased and when I caught up with the CEO, I asked him if he had an opportunity to talk to the team. He said they had a blast, there was a lot of energy in the room and they were super positive and things felt good. My heart sank. Because we had done all that amazing work and had these insights uncovered about the clients and none of that was conveyed to the CEO. That's what happens when we don't prepare a narrative.

Prepare a Narrative: When we don't have something rehearsed, then we just go to an emotional space. Especially when we've done something that is fun and energizing. That's what we easily fall back on when we don't have something prescribed and prepared and rehearsed. It's really critical that we end workshops and think about our innovation architecture or trajectory in a way that we can share this consistent narrative. Now we always end workshops with a narrative building exercise and ideally creating some accountability around that. We might even have an accountability buddy that you're going to agree to meet up with afterwards and at the very least there's a social accountability. Going around and building the narrative and talking about what's important for us to do next and who's agreeing to what and that work that we're doing is a final point of alignment. Especially in the Design Sprint, we start off the week getting into heavy alignment making and that's really critical so that our purpose is clear and we're on the same trajectory. Now, how do we get to a high degree of confidence around our alignment to make sure we're still really crisp on that? It's not only beneficial that we've rehearsed and prepared something that we can be ready to use when the time comes up, but it's also really helpful that we're consistent. If we've got to this high degree of alignment and we go out into the the business and we're sharing the same narrative, then the rest of the organization will perceive a sense of cohesiveness. Versus if we are out there saying slightly different things, even if they sound similar, it might breed some confusion or some concern. It might seem like there's a lack of continuity. Does this team know what they're doing? We were all in the same meeting, so we want to make sure it sounds like we were in the same meeting.

Simon: I'm intrigued by this idea.  Power of the Moment: I was thinking of a series of situations where I think that the power of the moment is lost because we didn't write it down or because we don't have it right here, right now.

Vision 2023: For example, we did our vision 2023 of where we will be in three years and it's a nine page document and it's as tangible as possible. I’ve begun this habit of first thing I do in the morning is I listen to an audio note I made of the Vision 2023. I paused emails so I cannot read my inbox before noon. I listen to the note, then I do some of the most important tasks of the day and then I read emails. That has made a huge difference in terms of energy and the focus. I'm thinking of so many situations where we had this meeting, we have this outcome, and now how can we make it feel present in the moment we'll need it? How can we embody it? How can we anchor it somewhere? How is it done so that after the meeting you have reached some point of clarity? How can you ensure that that clarity is still there three days later or whenever it is needed?

Douglas: Alignment: This is similar to what we've developed that we use when we're doing alignment on day one of the Design Sprint. Often we'll just rely on some of those techniques with a lot of active listening. Once we've got into some form of clarity then we start to have a discussion around that clarity. We document on the whiteboard if people say slightly different things, then write all these slightly different things down, even if it’s not totally cohesive, it might just be a word. We try to visualize it on the whiteboard, map it out whatever is floating around folks heads and then start to explore these differences and crystallize it down into a coherent message.

Open, Explore, Close: In a lot of ways it follows the “Open, Explore, Close” dynamic introduced by Dave Gray. Once we have that, then we're in a pretty good spot. Then we can build on this message, this narrative. Who are the different people that might need to hear this message? Do we need to nuance it? There might be customers or partners. There might be people that report to us or people that we report to. It could be all sorts of different stakeholders or different audiences that need to hear these different messages. And different things are going to be important to them. What's going to be important that we don't confuse them?  They might need different context because they're thinking about or might be concerned about different things. So getting really clear on that can be really helpful to think about. You can get hyper aligned and even though you've gotten to this moment of clarity, this outcome, there may still be some lack of alignment around how we plan to roll this out or who's going to get this pitch deck that we just created or what's the very next meeting we need to set up, these kinds of things. You could say that sounds like action items but some of it doesn't really surface until we start to really craft this narrative together around what happened and what it means going forward. I often find it can be helpful just to think about storytelling frameworks like: who, what, where were we, what was happening, what sort of conflict developed, and then how did we get to resolution on that conflict? It can also be helpful to understand where we maybe tried things that didn't work. There's some reversal there. Any of these kinds of plot techniques can be helpful to think about how we tell the story through the organization about what we're going to do and why we're going to do it and why some of these trade-offs were made. It can help us get really crisp on that language so that it can be repeatable and succinct. That builds resilience.

Simon: Clarity: I was thinking about what I do when I've reached a moment of clarity. I observed that when I have clarity on something I usually then go very intuitively and create momentum around that.

No Going Back: For example I send the concept to somebody who is relevant so that there is no going back. I buy that book on Amazon because that's one of my smallest steps in going forward there. I schedule something in a calendar invite which is not only in my calendar but also in somebody else's calendar. I go into actions that involve other people and t spending time or money or energy so that I cannot go back. In that moment of clarity it's easy to move forward, but I know that two days later or even four hours later, I will be in a completely different mode because there will be different decisions to make and different problems to solve so my mind will be cluttered again and I will be fighting fires again. I think of this moment of clarity as the moment I have to take action because otherwise it will be lost. S what happens when a team has a moment of clarity but they have to involve many stakeholders so they have to hold the clarity without jumping into action? They are usually not allowed to make every decision. They have to discuss the decision and to win other people over in order to massively move forward. What can they do to help this clarity stay there and be accessible when they need it?

Douglas: That's right. Allies: Sometimes it's about planting seeds and sometimes it's about finding allies and bringing other people in so that you have support. As you mentioned sometimes they don't have the authority or the power to make the decisions or do the work. Or maybe there's others that do have the power to make the decisions but there's others that they need to rely on for various capabilities or tasks. I think all of this can be really helpful, but if we want to build support throughout an organization for a cause or a task, then being very clear on why we're doing it and what we plan to occur is important. We need to make sure that language is really crisp and we're all aligned on it so when we spread that narrative to build more support for our initiative then we're going to be more resilient, more clear, more consistent.

Simon: Thank you so much Douglas.

Douglas: Thank you, too.

Simon: This is the third part of our interview, “Innovation Narratives”. It was such a pleasure to have you.

Douglas: It's good to be here.

Simon: I hope to have you again on our show very soon. Have a great day. Bye bye!

Douglas: You too. Bye!

P.S. Entrepreneurial freedom is awesome. It’s also a lot of hard work to get there. And when you are there, it is easy to lose your grip. Our community of 16.000 entrepreneurs is getting stronger and stronger every week, because we amplify each other. We share what works, and drop the rest. We test, refine, improve.  Check strategysprints.com to level up your business and have fun doing it!