The trial period has expired please purchase if you like to continue using the theme.
Achieving the mindset of sprinting. Douglas Ferguson Voltage Control

The Sprint Mindset with Douglas Ferguson 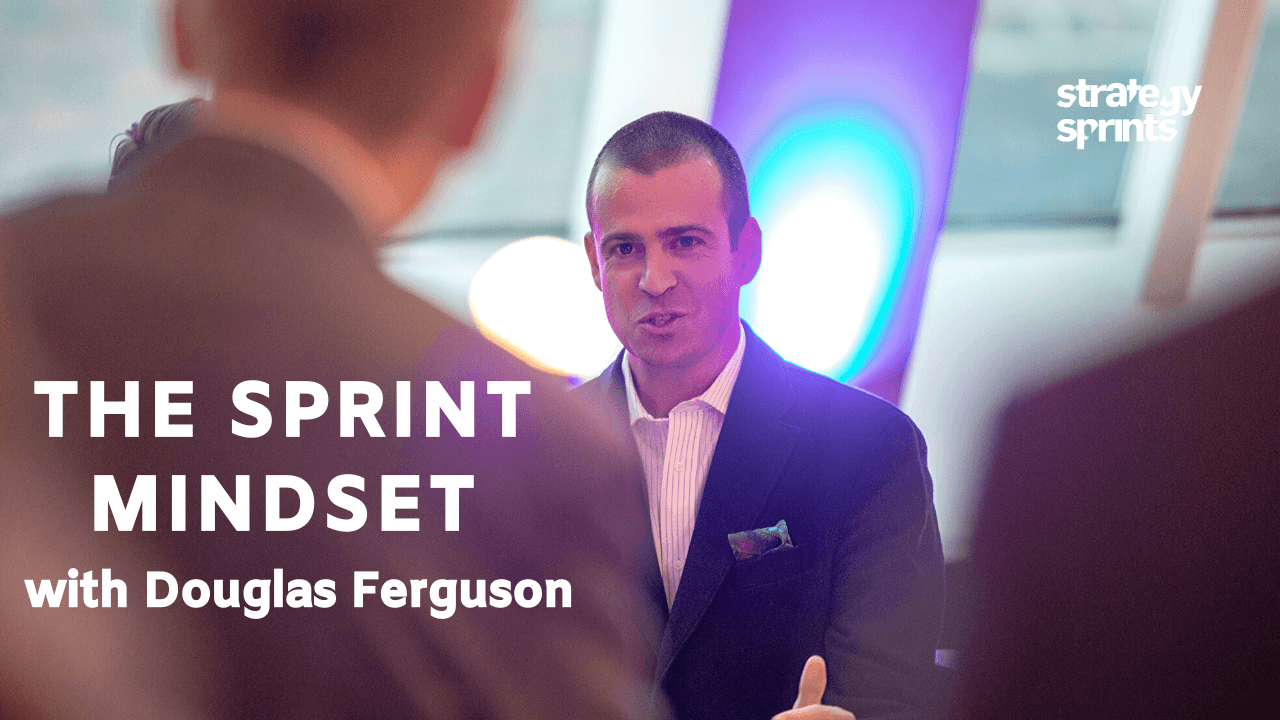 “People often wait around for the “perfect” data.” – Douglas Ferguson

Simon: Hello everybody! Welcome to the Strategy Show! In this episode we are going to interview Douglas Ferguson.

Simon: In this series, we are going to cover three topics: The Sprint Mindset, How to have better meetings, and Innovation Narratives. Welcome to the show Douglas! Where are you right now?

Douglas: I’m in Austin, Texas and it’s a little chilly.

Simon: Can you describe a little bit of what you do to our audience?

Douglas: I run an agency called Voltage Control and we are a workshop agency. We help people run workshops to work better together, reimagine our meeting culture, get past problems we have with making decisions and just face all sorts of challenges and and problem-solving that we might need to do as a company to better innovate.

Simon: When we say the Sprint Mindset, what would be the opposite?

Douglas: I guess the stark contrast would be to maneuver completely off of opinions and conjecture. There’s an interesting kind of phenomenon where even when people think they’re not working off of opinions and they’re really focused on making decisions based on data, often they are waiting around for perfect data. They end up making decisions off a hunches and guesses while they’re waiting for that perfect data. This is typically because they’re in pursuit of the perfect quantitative test. Getting to the point where we can get something to market and up to scale and then we’ll start really digging into the data and analyzing. But up until then, we’re removing through things with a lot of confidence that we don’t really know a lot about. We may have context, we may have history on the subject, but how our solution integrates and impacts the users and clients that we might be pursuing, we don’t know a lot about that at this point. It’s important that we stay really curious. I think the the opposite of a Sprint Mindset is that we’re not super curious and we’re working a lot off of assumptions.

Simon: If we define workshops and sprint, what would it be? One definition that I use sometimes is the difference is in a sprint you test during the work and there is no homework later. A workshop would be something where at the end the outcome needs to be tested. But in a Sprint, you would test it during the work and when the work is over, testing is over. The beyond starts.

Douglas: I like that definition because there’s a lot of riffs and variations on the Design Sprint. There’s the four day, the three day, the two and a half, everyone should come trying to compress it down. I agree with you there’s a few core components and if we’re not doing some of those things then it’s really no longer a Design Sprint. Let’s just generically refer to it as a workshop. We’re still coming together to do deep intentional work with a group in a structured manner. But in order for it to be a Design Sprint we have to have that testing, we have to have a prototype that we built together. I think those things are pretty pretty critical. Without those it’s something else.

Douglas: The Design Sprint’s a five-day process for solving tough problems. It is a really fantastic tool for kicking off projects or getting unstuck. If you have a critical project and you haven’t been able to get traction on it, or maybe you just you hit some sort of impasse and you’re just not sure how to move forward, it’s a really great way to help unlock the creativity of the team, harness the power of diversity and put some ideas forward. And then begin to learn from those ideas and see where the the real opportunities lie.

The Design Sprint is broken up into this five day process. It starts off with gaining the high-level alignment on the team, which can be very critical. Often, I see teams saying the same words but just aren’t totally aligned. They’ve all read the brief, but once we start getting underneath the surface, we start to uncover that there’s a real lack of understanding around where we’re headed and why.

Day one: It can be really great at getting to that alignment so that we can move forward and start to get to insights.

Day two: It’s about coming up with ideas and sketching those ideas.

Day three: We’re going to go through some group decision-making tools so that we can come out with a really solid understanding of what we’re gonna build.

Day four: We build that thing. The prototype gets built in one day.

Day five: Then we test it with five users.

Simon: Should a manager, product team, or CEO do a Design Sprint at the beginning of the project? Or in the middle of a project? Or at the end?

Douglas: I think it’d be really difficult to do one at the end unless we’re thinking about what’s next. If we’re at the end and we’re launching stuff and we’re not sure about what opportunities might lie as far as our next steps or where we might evolve this thing, then it could be helpful. But most commonly, it’s at the very beginning. Sometimes I’ve seen it done in the middle when we start to realize that maybe we’ve been spinning our wheels or we’ve hit an impasse and we’re not sure where to go next. Then the Design Sprint can be a really powerful tool to think about how we unlock that. Again, the beginning is the classic, this is where you find the most power out of a Design Sprint.

We’ve seen meeting systems develop around how to fold a Design Sprint into your kind of cadence of meetings or the process by which you go about building things or approaching service design, product design, that sort of thing. Based on the way you approach your work, the Design Sprint can be appropriate at different junctures. It’s important to be conscious about when you do it and not just randomly try it.

I like to refer to it as heavy artillery. We’re gonna pull in seven or so people into a conference room for five days straight, that’s a big investment. We’ve got to be really careful about when to do it and when it makes sense. So, it’s typically on a really important project where we’re really stuck or we really wanted to ensure that we get a really momentous start for that project.

Simon: Let’s say, the team says it’s a big enough question, it’s relevant enough and outcome we start with scheduling the meeting. How should the team prepare?

Douglas: Preparation is very critical for a Design Sprint, with lots of things to consider. Participants are a key element, but before we go there, I want to make something really clear. When you say that we’re ready and we’ve got a problem, I immediately assume that there’s been adequate problem framing. (Alarm goes off, a time timer, something to prepare). It’s essential that you’ve done proper problem framing and that your problem is well-defined and well understood by the team and we agree that it’s the most important thing to attack at this point. Apart from that, we want to make sure that we have our participants, our space…

Simon: Do you also need finance or product in there?

Douglas: I think as diverse of a perspective as you can bring into the room is best. Typically someone who understands the logistics, the operations, the customer, and it even can be helpful to have the finance side if we’re doing any kind of pricing or business model tweaks or consideration. Someone who understands that stuff is going to be really critical to the Sprint. Anyone who’s going to be responsible to execute the stuff after the Sprint is also really important.

Sometimes we can’t plan perfectly because the Design Sprint can often present things that we hadn’t anticipated. There may not be a home for this thing in the organization. There may not be a business unit where this fits nicely into, but what we find is that if we have a diverse perspective of the participants, they can at least hold space and shepherd this idea through. But then afterwards, we might have to review who else we need to pull in. Previously, we had to spin up a new unit to support this work because this innovative work revealed something that we hadn’t previously accounted for. It’s a new project, a new way of thinking about the work that we do.

Simon: That’s all the time for today. Thank you very much, Douglas. For the listeners, Douglas wrote a whole book about it. Douglas Ferguson: “Beyond the Prototype”. Check it out! This was our first conversation with Douglas: “The Sprint Mindset”.

For next week: it’s not always the case that you can take seven people out for five days for a very special thing, this Design Sprint. We have to also talk about the day to day operational meetings, the normal meetings that people have. Our next discussion is “How to Have Better Meetings”.

P.S. Entrepreneurial freedom is awesome. It’s also a lot of hard work to get there. And when you are there, it is easy to lose your grip. Our community of 16.000 entrepreneurs is getting stronger and stronger every week, because we amplify each other. We share what works, and drop the rest. We test, refine, improve.  Check strategysprints.com to level up your business and have fun doing it.